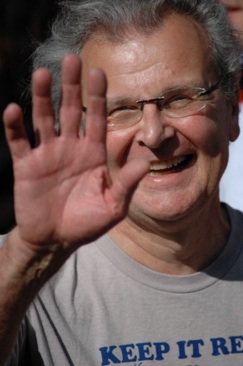 Cecil Bothwell was elected to the Asheville, North Carolina
City Council in November, 2009. He has received national
awards from the Association of Alternative Newsweeklies and the
Society of Professional Journalists for investigative reporting,
criticism and humorous commentary, and was named the most
Courageous Elected Official of 2010 by the American Atheists.
He is former news editor of Asheville City Paper, former managing
editor of Ashevilleís Mountain Xpress and founding editor of the
Warren Wilson College environmental journal Heartstone,
he served for several years as a member of the national editorial
board of the Association of Alternative Newsweeklies and
currently serves on the boards of two international educational
nonprofit organizations working in Latin America.
His weekly radio and print journal, Duck Soup: Essays on the
Submerging Culture, remained in syndication for ten years.

In a region with a reputation for crooked lawmen, Bobby Medford is that rare exception: caught and convicted. He was dealt a fifteen year sentence in the federal prison system for conspiracy, extortion, money laundering, mail fraud and illegal gambling. But that’s just part of his story. Bounty hunter, debt collector and addict, he left behind a trail strewn with guns, drugs, bodies and cash. Pure Bunkum offers a reporter’s-eye view of the way public corruption proliferates, even when “everyone knows” what’s going on, told by an award-winning journalist with an eye for the absurd.

Garden writer and editor Cecil Bothwell delivers a series of essays reflecting more than 30 years as an organic gardener, with characteristic insight and humor. The book is a guide through the seasons and the weeds, with ideas about edible landscaping and vermiculture, back yard ponds and alternatives to the suburban lawn, by a writer with a deep background in environmentalism and green living.

The first "best-of" collection of Cecil Bothwell's nationally syndicated column. Tweaked and freshened up a bit. The essays address many aspects of modern living with particular attention to the environment and sustainable living.

The Prince of War: Billy Graham's Crusade for a Wholly Christian Empire (2007) paperback $16

The first biography of the world's most famous preacher to expose his unabashed support for wars from Korea to Iraq. Fully documented by research in the Billy Graham archives, the Library of Congress, presidential libraries and the Martin Luther King, Jr. Center. Graham advocated genocide in Vietnam and, in the week before the first Gulf War, told President G.H.W. Bush that Saddam was the Antichrist and that it was Bush's historical mission to destroy him.

Artist , playright , puppeteer and story teller Jerald Pope wrote and illustrated this wonderful read-aloud book about a little girl (his daughter) and a pet dinosaur. Lots of great pet lessons and beautiful illustrations.

Best-selling guide to the Paris of the South. Co-authored by Betsy Ball and with help from Steve Shanafelt. Not your usual guidebook.

The second "best-of" collection of Cecil Bothwell's syndicated columns, offering his view of modern society as a frenzied cartoon coyote, three steps over the edge, somehow imagining it can fly during the one-beat, two-beats, three-beats before reality knocks and gravity beckons. We are probably doomed, he suggests, but we might as well at least enjoy the fall.
Readers from Orlando to Anchorage and San Jose to Hyannis know that no subject escapes parboiling in Duck Soup: DARE, prayer, GMOs, GDPs, cats, dogs, nuts, bolts and former governors all tumble into the pot.

“Early on, we were limited to crude gestures and grunts, the sort of pseudocommunication seen today when the unexpected coupling of recessive genes produces a Howard Stern.
Once armed with true language, however, humanity flowered. Our frontal lobes swelled with pride. We yakked. We jabbered. We talked about the neighbors. We wrote War and Peace. We became tasteful and lovely and truly the crown of creation.
Abandoning the rough, heathenish clobbering of noggins with lumpy clubs, we soon adopted charitable and uplifting religious doctrines to justify rocket attacks and anti-personnel mines.”
-from “Speak, doggy, speak!”

The original version of this collection. Not as flashy as the 2008 update. Tasty nonetheless.